Situated in the Pacific Ocean off the coast of Ecuador, the 19 isolated Galápagos islands and the surrounding marine reserve form a spectacular showcase of diverse animals and pristine ocean. Located at the confluence of three ocean currents, the Galápagos are a melting pot of marine species found nowhere else in the world. Read on for a comprehensive look at the Galápagos Islands, and the best way for you to experience them!

Why choose a cruise?

We believe that a live-aboard yacht is THE best way to see the Galápagos Islands!

Ability to see MORE islands and MORE wildlife than a land-based tour!

A wide variety of different cruising vessels available so you can find the one perfect for your group!

Camaraderie of spending your time with such a small group, whether you charter a yacht with your friends or join with new ones! 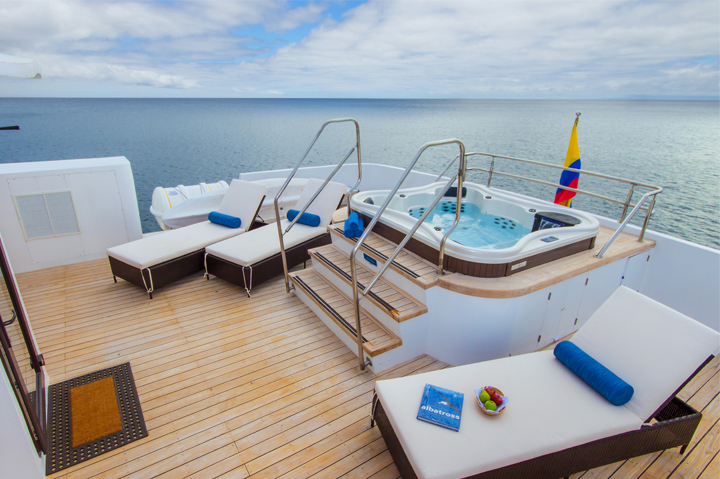 There are almost 100 cruise ship operators throughout the Galápagos and therefore a wide variety in the different sizes, luxuries, and quality of experiences. We highly recommend opting for one of the smaller cruise ships, normally 16-20 people. If you have a group of friends this is a perfect size to charter the whole ship, otherwise you can just book a cabin aboard and spend the evening getting to know other travelers from around the globe.

The M/C Endemic is the newest catamaran in the Galapagos, launched in July 2018, with capacity for 16 passengers. Being the first in a new generation of catamarans, the Endemic boasts elegant exteriors, spacious and luxurious accommodations, and a beautiful al fresco dining area. Travel between the islands is fast and offers great stability due to the Endemic’s innovative design. We are excited to share this luxurious experience with you to make your trip to the Galapagos even more memorable and comfortable.

The most popular way to cruise the islands, single hull cruise boats offer the best of both worlds. Many have luxurious interiors but still maintain that classic boat feel. Knowledgeable guides will show you the best that the Galápagos has to offer, help you get your sea legs, and rejoice with you at each new wildlife sighting. Below are examples of upper-tier, mid-tier, and lower-tier yachts. 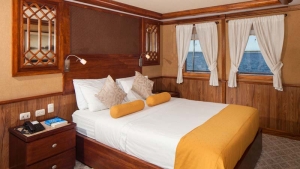 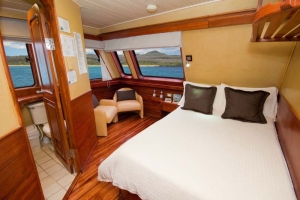 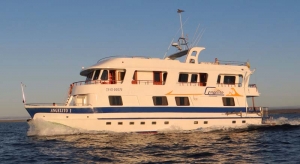 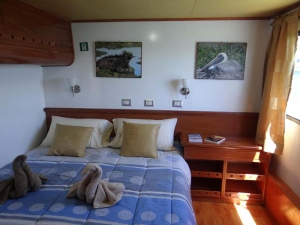 Catamaran boats, or boats with two hulls, provide the ultimate cruising experience, combining spacious interiors with a stability unachievable by single-hull boats. Also with a maximum capacity of 16 passengers, you can decide if you want to be with the group or enjoy the Galápagos from the private balcony off your cabin. Below are examples of upper-tier, mid-tier, and lower-tier catamarans. 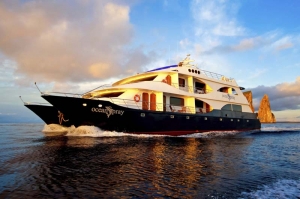 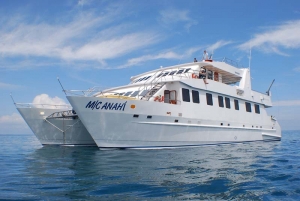 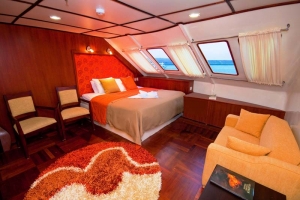 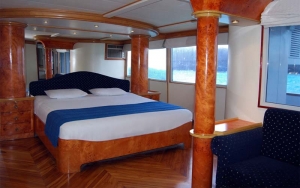 Is a land-based tour right for you?

Explore the Galápagos from its port towns!

Land-based Galápagos tours offer an alternative to live aboard yachts. Stay in comfy hotels, eat at local restaurants and visit nearby islands on day tours by small speedboat. Galápagos multi-sport and island hopping tours are done on the inhabited islands. 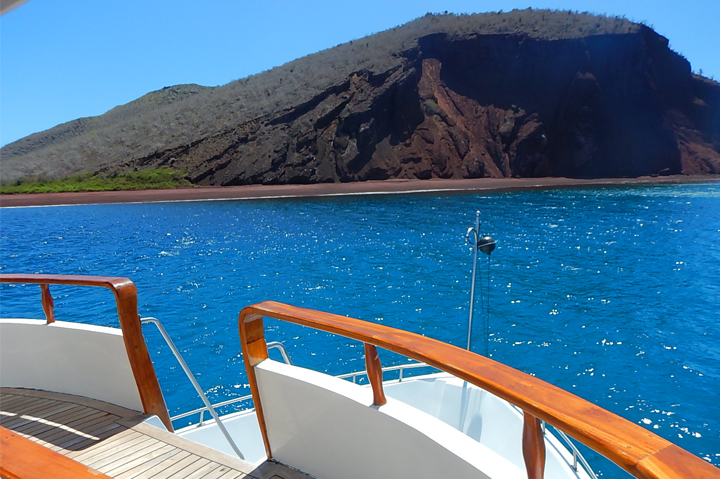 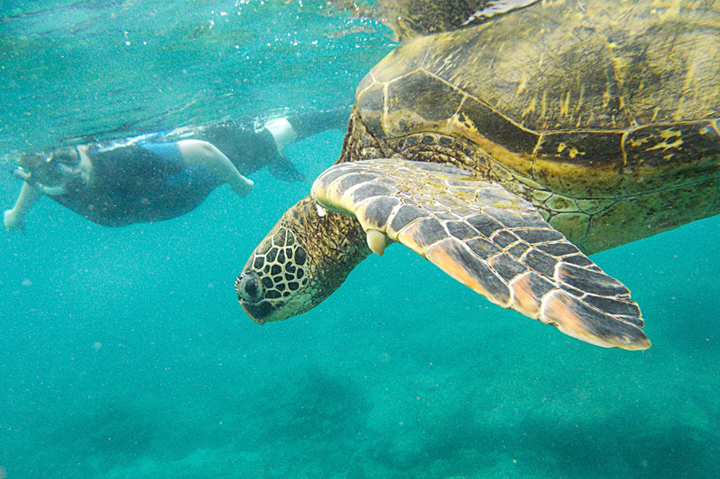 If you can’t stomach the seas or don’t enjoy relaxing on-board the ship, booking a multi-sport tour of the Galápagos is a great option. Over the course of your stay you will get the opportunity to snorkel with the sea lions, sea kayak the crystal-clear waters, hike and bike the volcanic islands, and spend time relaxing on the beaches. You can include day trips to different islands via motor speedboat to the hot spots of your favorite animals so as not to miss out on all the amazing wildlife!

If your heart is set on a cruise-based tour but you wouldn’t mind some hiking or biking as well, you can always add a few land-based days onto the end of your cruise! This will allow you to get the best wildlife viewing on the cruise, and also get active on land. A few days on land exploring the port-towns and supporting the local economy is a great way to wrap up your Galápagos experience! 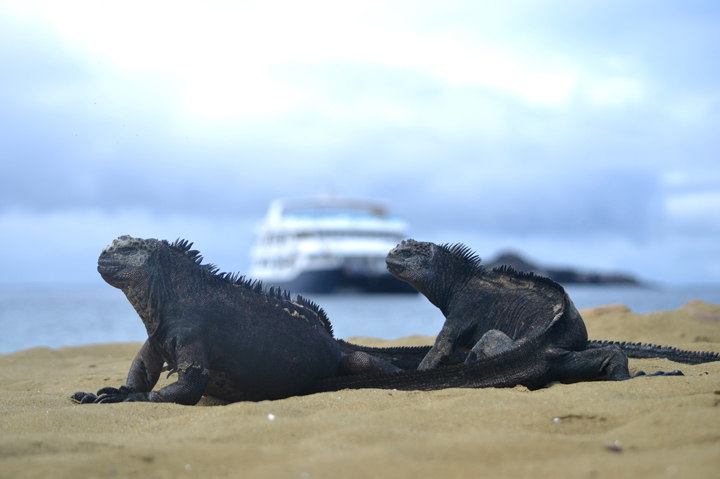 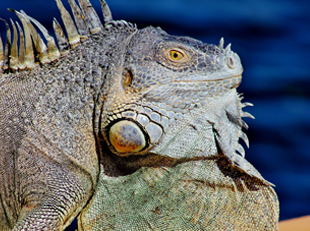 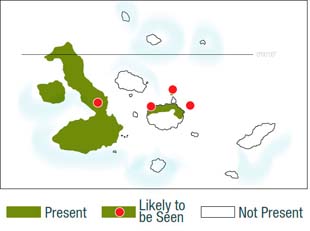 The Galápagos land iguana lives on several of the islands and the biggest adults can weigh up to 30 lbs. Nesting periods vary from island to islands, and females bury anywhere from two to twenty eggs in burrows. Rare hybrids of land and marine are known to exist on little South Plaza Island, and both species can be seen there side by side. Land iguanas feed mainly on plants but also feed on whatever else is available, even carrion.

To remove the small and annoying spines of cactus fruit, land iguanas are known to roll them repeatedly over sand and stones before eating them. These reptiles have a life expectancy of about 50 to 60 years. Invasive mammals have taken a strong toll on these iguanas, with rats attacking eggs, and feral dogs the adults, but the national park’s programs to eradicate introduced species have helped the iguanas recover. Their current population is estimated between 5,000 and 10,000 animals.

During the hot season (December-May) their courtship behavior is quite amazing to observe, full of aggressive chasing, territorial displays, and the development of bright brown and yellow coloration in their skin. 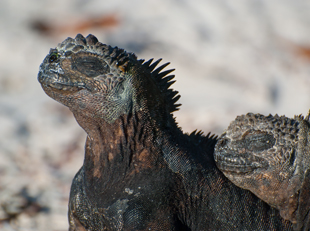 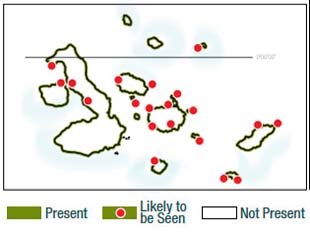 The marine iguana is one of the most amazing Galápagos species. Darwin referred to them as “imps of darkness.” They arrived as terrestrial iguanas, and then evolved into their marine status and then spread throughout the archipelago, a great example of Darwin’s idea of natural selection. They are found on all Galápagos Islands – but nowhere else.

Their critical adaptations to a marine habitat include a reduced heartbeat and constriction of blood vessels near its skin to avoid temperature and oxygen loss. A shortened snout with small tricuspid teeth allow them to graze on the narrow algae they forage at low tide.

Their life span is shorter than land iguanas, only around 40 years. Visitors to the Genovesa island will find the smallest and blackest marine iguanas. While on Fernandina and Northern Isabela can be found the largest marine iguanas.  Floreana and Española harbor the most colorful subspecies. 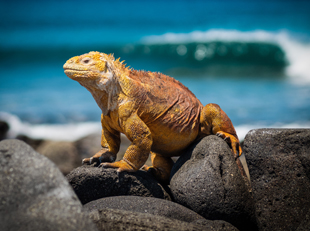 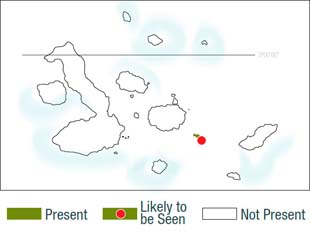 The Santa Fe land iguana, defined by its smaller dorsal spines, more brownish color, and tapered snout, lives only on the little island of Santa Fe. Perfectly adapted to blend in with its surroundings, it is somewhat more difficult to observe than the other land iguana.

The Santa Fe land iguana is categorized as vulnerable given its tiny geographical distribution. The eradication of feral goats in 1971 has helped the species to survive. The 3-11 eggs females lay take about 50 days to hatch in their burrows. This island-endemic reptile can only be seen on Santa Fe Island. 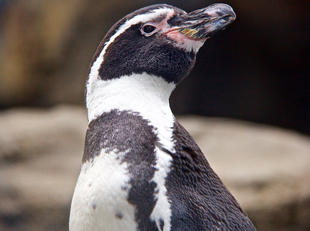 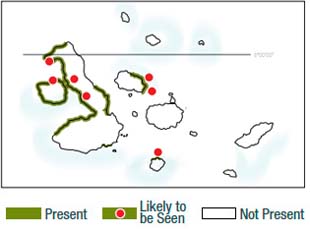 Galápagos penguins are the only penguins that live on the equator, the only penguins that molt twice a year, making them the rarest of all 18 species of penguins. The Galápagos penguin is also the only species of penguin that has no set breeding season, can lay eggs up to three times in a year, and, when food is abundant, can raise two chicks in about three months. They mark an astonishing deviation from the rest of the penguin family.

These penguins can survive on the equator because their breeding biology is adapted to the unpredictable upwelling of productive, nutrient-rich water in the Galápagos archipelago. During breeding, they shed their feathers around their eyes and bill so they can lose heat, and they stand with their feet in the shade to avoid the hot black lava.

Unfortunately, the current population is less than half of what it was in the early 1970s, with somewhere between 1,500 and 4,700 individuals. The population of Galápagos penguins has not recovered because of several severe El Niño’s in the 1980s and 1990s and the introduction by whalers of predators like rats and cats to the islands. 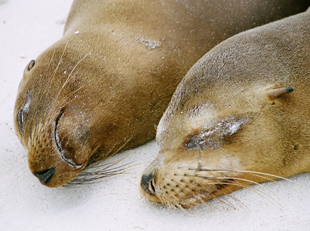 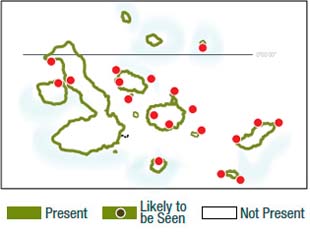 Similar to the Galápagos Penguin, the Galápagos sea lion is another unique seal species as it lives right on the equator and is exposed to greater heat and less food than colder-climate species. The productivity of the water around the Galápagos, as well as the sea lion’s adaptations, allow it to thrive nonetheless. This is the smallest species of sea lion, with females only weighing around 165 pounds and males up to about 440 pounds.

They live throughout the Galápagos, but most densely populate the central islands. Given that they are an endemic species in a small area, they are still listed as endangered. Excellent divers, they can descend up to 1,900 feet in search of food. Visitors may see sea lion pups during most of the year but most births are October and November. During this time, dominant males defend their territories and harems along the shore, living off their fat reserves, while smaller males may try to sneak in and find a mate. This can make for quite an entertaining afternoon spectacle. 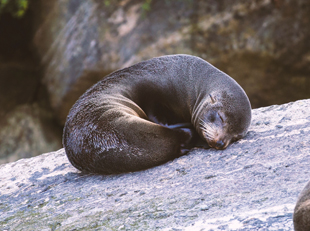 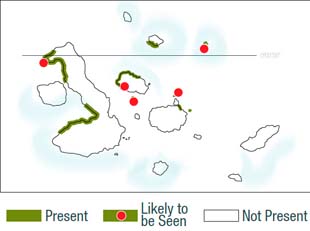 The Galápagos fur seal is the smallest of all seals. It appears to have arrived in the archipelago relatively recently and is more similar to its mainland relative than the Galápagos sea lion. It currently numbers around 15,000 individuals but can be highly susceptible to El Niño events which break down the food chain these seals rely on.

They live mostly on Fernandina and the western side of Isabela, but can often be seen in other parts of the Galápagos, notably Puerto Egas, North Seymour, and Genovesa. Solitary males can occasionally be found all over the archipelago. During breeding season, between September and December, males however defend their territories for two weeks to a month at a time, living off their fat reserves.

Galápagos fur seals tend to hunt well offshore at depths between 200 and 330 feet, seeking fish and squid that at night tend to rise to these depths from further down. The bright light of the moon keep this ascent from happening, so that most fur seals tend to spend nights around the full moon on land.